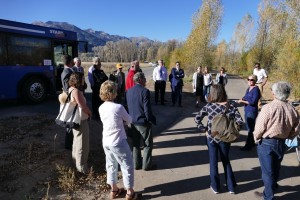 The Wyoming Joint Travel, Recreation, Wildlife and Cultural Resources Committee met in Jackson, WY on Monday and Tuesday, September 26th and 27th. Part of the work assigned to the Committee during this session is an Interim Study on bicycling and walking. The Committee worked to refine the proposed Bicycle System Task Force Bill.

The TRW Committee boarded a START bus to drive to Stilson Ranch, touring the new sidewalks and cycle tracks along West Broadway, and the new pathway along WY-22, two underpasses and the 742’ Snake River Pathway Bridge. Twenty years in the planning, these new pathway finally bridge a missing link in the Jackson Pathways system, safely connecting Jackson and Wilson. The total of the combined investment in the projects is $15 million. 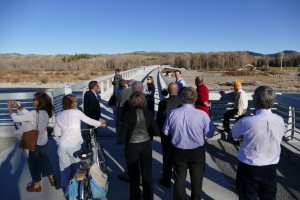 Most of the committee members took advantage of the beautiful weather to walk the pathway, tour the 40 acre private/public R-Park, and walk the pathway bridge. It was a great opportunity for the group to experience the new facilities and network with each other. Chairperson Petroff said that she was pleased and thankful she could provide that experience for them ahead of the discussion on cycling.

The TRW Committee took up the draft Bicycle System Task Force Bill that was started the last meeting in Kemmerer. The committee solicited testimony from various experts and concerned parties, including Gregg Fredrick, Assistant Chief Engineer with WYDOT, Tim Young, Executive Director of Wyoming Pathways, Angela Emery of Platte River Trails and Chris Brown of the Restaurant and Lodging Association. Mr. Fredrick’s testimony was generally in support of the Task Force and he provided constructive comments to include maintenance needs in the duties. He also described the Bicycle and Pedestrian Steering group that WYDOT is creating to update the state bicycle pedestrian plan. There was some discussion about whether the new bill would be redundant with that underway, but the committee decided it was complimentary, and the bill was needed.

Wyoming Pathways’ Tim Young provided additional testimony, stating the organization’s support for the bill and willingness to help move it forward. Included in his testimony were suggestions that the bill include walking as well as bicycling, so that it could cover two modes of transportation that are both important and complementary. He also suggested that the bill should specifically call out the need to study natural surface trails, in addition to paved pathways, which would allow the bill to cover single-track trails that are not part of WYDOT or urban pathways, but are increasingly being built in many Wyoming communities and State Parks. In concert with that suggestion, he also recommended that the task force should include a member from State Parks knowledgeable in natural surface trails. These suggestions were integrated into a revised draft bill that Mr. Young presented to the committee for review.

Angela Emery of Platte River Trails, Katherine Dowson with Friends of Pathways, and Chris Brown of the Restaurant and Lodging Association all spoke in support of the revised bill and subsequent comments were positive and supportive. The Wyoming Business Alliance also sent their support for the bill.

Ultimately, a motion was made to include nearly all the recommended changes and bring a clean copy to the next meeting in Casper Nov 9-10. The amended bill passed 10-4.

If your Representative or Senator is on the TRW Committee, please thank them and express your support for the “Bicycle and Pedestrian Task Force” bill.